Even with the power of a real ATmega328P microcontroller running at 16MHz, the 32Kb of memory space on an Arduino is not enough for larger projects. It would be great if we can harness the power of our PC to do the complex processing while the Arduino can be the platform for the sensors and motor controls. In this configuration, you can do much more, the only draw back is you do need to keep your PC tethered, by USB or Wifi. For some applications this is fine and preferred. In those cases, Firmata is one solution you can use to make this very simple.

Firmata is a generic protocol for communicating with microcontrollers from software on a host computer. It is intended to work with any host computer software package.

In essence it turns your Arduino into a slave with a simple provided sketch. Then using the Processing platform you can interface the Arduino via Serial bus and exposed API provided by the Firmata system. Firmata takes the leg work out of designing a custom software protocol layer any application will need to interface between the Arduino and PC, it does it for you.

First we must slave the Arduino:

3. If you have an older Arduino, add a LED to pin 13 if you have a newer one you will already have a surface mounted LED to use.

Now we set up the processing environment:

2. Then unpack the compressed file and then copy the folder arduino to your Documents, libraries within your Processing Sketchbook folder.

3.Run the following code in Processing:

Now that we have both systems connected, there is  no need to compile and upload to the Arduino anymore. 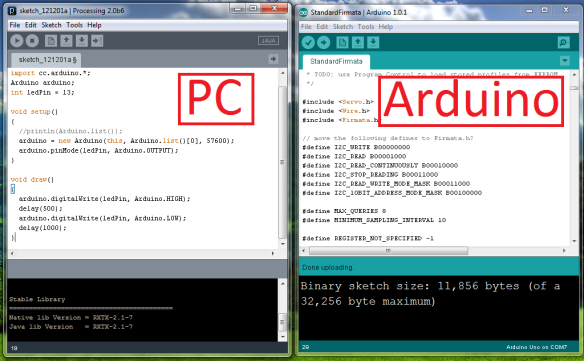 In fact you can close the Arduino program and work exclusively in processing. This is just a simple test but establishes the base connection and work required before complex systems can be developed.

Here is the Arduino in mid blink.

I did run into an issue where the processing program refused to run. I got an ugly error message:

8 thoughts on “Using Arduino, Firmata and Processing Together”