United States Secretary of State Rex Tillerson and N.K. Official “X” are having a back channel meeting, in a nondescript building..

X is high energy, sitting with impeccable posture…he speaks with a tone of a school teacher to a student..

“Mr Tillerson, my country has been at this a long time. You are not the first American administration bringing empty threats to force us into talks. We don’t fear America as today we have more nuclear bombs than most countries in Europe. It is only a matter of time before we perfect our delivery and reentry systems. America dare not to attack otherwise millions of poor in South Korean will die, and maybe even a few hundred thousand Japanese for good measure. (leans in) Our Dear Leader has given me permission to relay the fact, his secret plans… We are only using SK as a hostage, instead of killing them, we will make them watch us destroy Japan and America, they will have the burden of being left alive, and doing very well.. while the world that came to protect them suffer and die.. many South Korean will commit suicide than live with this shame. We want steel, plans and engineers required to build a US Class Aircraft Carrier. This is what Hillary promised us through back channels during the election. Has your dotard not learned this fact? maybe you can use this persuasion on him.. ” – X

…. A long pause of just staring intensely at X in total silence and stillness..

(clears throat) “Let me be as forward as I can be.. I really don’t think you have a choice here.. look, listen.. you guys had a good run with the last administrations, that time is over. If you want to be seen as a nuclear power on the world stage, you got that.. now you can be rest assured we will treat you like one. Unfortunately, my President is convinced niceties, gifts and “assurances” have failed every leader before him, and in fact have only embolden, enabled and accelerated your nuclear program. I can’t tell you want to do, but I can tell you your time is running out. China has cut access to banks, and material. As you already know my President has signed and sealed orders of engagement. We’re ready. You don’t know what our capabilities are today. What you see on TV.. “Hollywood” that shit is 100 years behind what we actually have, and I am not talking stealth bombers, there are some weapon systems so advanced, so lethal other administrations would not even consider them as options… I think Sun Tzu said it best…

Keep your plans as dark and impenetrable as night.. when you strike, fall like a thunder bolt!”

(Tillerson leaves those last words on the air as he squints his eyes at X, after a pause he leans in)

..This President will not hesitate where others have. I am pleading with you.. If there is any room for peace and agreement, bring your concessions forward now or face ..  “Fire and Fury”…. (leans back against his chair)

Then, as if on queue…

<it’s from President Trump!>… X starts to read it.. 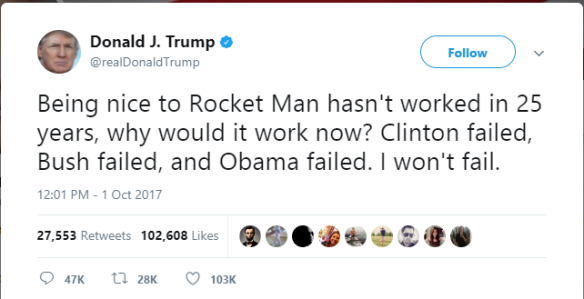 <it is again from the President…>

Without having to say a word, Tillerson gives X a serious curl of his mouth, and jab nod.. “See.. I told you so”.

X looks down then up from his phone.. stands, bows in silent acceptance and runs off..

Tillerson noticed X was really freaked out after reading the tweets. Let’s hope they get the message..

We didn’t survive the Cold War with the U.S.S.R. to be destroyed by a punk dictator in a 1950s snow-globe.

It looks like the sun… but it isn’t. It’s a brand new type of artificial skylight called CoeLux which, for the first time, recreates the scientific process that makes the sky appear blue. It also creates an illusion of depth to make the ‘sun’ appear to be far above. Lux takes an exclusive look.

Even as a boy, I have always been fascinated with the idea of creating energy. This nagging feeling growing up that there is a magic combination of magnets, springs, pendulums, and gravity, all in a special configuration to create a machine that exists in a balance and can run a very long time.

This machine is a great example of just that idea. Remarkably engineered, it still can not escape the conservation of energy that will eventually bring the magnets to lose their magnetism as well as the friction that will wear away parts. For these reasons, the machine’s motion will eventually come to an end. There is also no evidence the ball can drive a mechanical linkage to generate excess power without giving up a lot of energy. Maybe traversing a tunnel of coils could solve that problem? But I suspect even then, eddy currents in the copper will slow the ball further and ruin the balance.

That said, even with these caveats, it still seems brilliant in its design and wonderful for inspiring further thought.

Find out how Rosetta and Philae are preparing for their biggest adventure yet – landing on Comet 67P/Churyumov-Gerasimenko. The latest installment in our once upon a time cartoon series.

And you thought your commute was bad.

Amsterdam Airport Schiphol is on a mission to reunite lost items as soon as possible with their legitimate owner. From a teddy bear found by the cabin crew to a laptop left in the lounge. Locating the owners can sometimes be a challenge, so special forces have been hired.

“Personally I think he is a real asset to the company. And he can really do something no one else can. Our main goal is to return lost items to the owner. As fast as possible. To do that, we monitor social media. And the crew checks the plane after every flight… When you see the reactions of the passengers that really is amazing. He drops by regularly but I have to admit: I do spoil him a bit”.

Beware, faint of heart turn back now. John totally geeks out on new ideas he has for refresh rate times, advanced display drivers and head-tracking/render optimization.

He is one of, if not the greatest game engine programmer in history. We should feel very lucky to have John leave ID to join the Oculus team and devote his focus to VR and the Rift headset. I doubt anyone alive today is better skilled and experienced to advance the new industry than Mr Carmack can.

Here is a priceless reaction from a guy experiencing “remote presence” for the first time during a simple miniature roller-coaster demo using the Oculus Rift. Notice how he ducks to avoid obstacles.

What’s happening is your body believes the input so much, that it refuses your own abstract understanding that you are really not moving and believes you are in danger. It forces you to duck using the fight or flight response. This is why people like Mark Zuckerburg have invested billions, he realizes just how ground-breaking this technology will be moving forward.